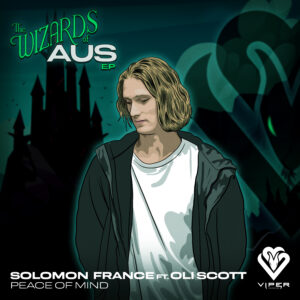 The Australian DnB scene is on fire right now with acts like Ekko & Sidetrack, Blaine Stranger, V O E and Solomon France (FKA SØL) all regularly tearing down the dance and producing flames in the studio. What’s more all of these awe-inspiring artists are proudly flying the flag for Viper Recordings.To further showcase their talents we are pulling together the Aus team to all feature on the ‘Wizards Of Aus EP’

The second release in the series comes courtesy of rising star Solomon France, the artist formerly known as SØL. Solomon France took the decision to change his stage name to his actual name because it felt more personal to him, and with a name as suave as Solomon France who could blame him. His previous killer tracks including ‘Need You’ and “Let it out” have set some seriously high expectations, and we’re hugely excited to show you what’s next.

His ‘Wizards Of Aus’ release ‘Peace Of Mind’ proves he’s got that magic touch and features the vocal talents of fellow countryman Oli Scott. The track starts with smooth, soothing piano waves and Oli’s soft, heartfelt croon before hitting with a sudden energy ready to get any party started. A perpetual forward-moving drum pattern lays the foundation of the track, which is layered with bright sci-fi synths and a warm melodic bassline.