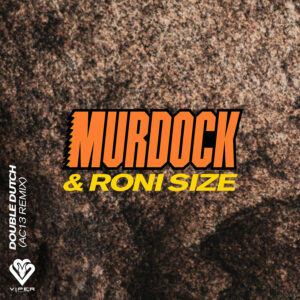 2019 saw the release of Murdock’s debut full length studio album on Viper with Stronger, featuring hits like ‘Can’t Keep Me Down’, ‘Make Me Stronger’, and ‘Holding On’ and amassing millions of streams already. Although people are still talking about this seminal release, Murdock and Viper are taking things to the next level with a series of remixes and new tracks coming later this year as a deluxe edition of the album.

Following on from the success of recent new single ‘Dollars Aren’t Cheap’ and the VovKING remix of ‘Can’t Keep Me Down’ as well as the hefty Enei remix of ‘Dark Cloud’ featuring Dynamite MC, the next name to join the Viper family is none other than AC13 with his take on ‘Double Dutch’.

Smashing up the DJ circuits for months pre-lockdown, this sinister number was made for the rave. Maintaining the discernible Western call-to-adventure mood of the original, the track opens with the same upbeat, jazzy energy Murdock & Roni Size created that saw the track do so well originally. However, AC13 wastes no time putting his own signature on this one with a drop that nothing short of heinous. Turning things up more than just a notch, the drop is loud, in your face drum & bass, injecting the track with jarring basslines that beg to be played on the loudest soundsystems in clubs and in studios around the world.

Capturing the adventurous nature of the original but with a sinister twist, AC13’s take on ‘Double Dutch’ is everything a good remix should be, familiar at times while still being completely different from the original.
One of the hottest new names in drum & bass at the moment, AC13 has smashed it out of the park with this remix, a proud addition to the Viper catalogue and an exciting celebration of Murdock’s Stronger LP. Keep an eye out for more Stronger remixes as part of the deluxe edition of one of the genre’s most well-loved albums in recent years before the end of 2020 on the mighty Viper Recordings.