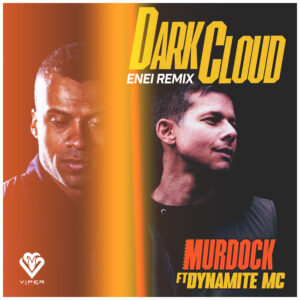 2019 saw the release of Murdock’s debut full length studio album on Viper with Stronger, featuring hits like ‘Can’t Keep Me Down’, ‘Make Me Stronger’, and ‘Holding On’ and amassing millions of streams already. Although people are still talking about this seminal release, Murdock and Viper are taking things to the next level with a series of remixes.

Following on from the success of recent new single ‘Dollars Aren’t Cheap’ and the VovKING remix of ‘Can’t Keep Me Down’, the next name to step up to the plate is none other than Enei. Making his Viper debut after years of triumph on home label Critical, Enei brings his signature murky sounds to his take on ‘Dark Cloud’ featuring the one and only Dynamite MC.

Adding a dark & visceral energy to the mix, Enei transforms the original into something far more sinister. Maintaining the original vocals courtesy of MC Dynamite, Enei gives things a murky twist with blazing foghorns and crisp snares for the ultimate underground stomper.

A welcome addition to the Viper catalogue and the perfect taste of what is to come, Viper are proud to release Enei’s remix of Murdock & MC Dynamite’s ‘Dark Cloud’. Watch this space for more from Murdock as we celebrate the Stronger LP over the coming months!