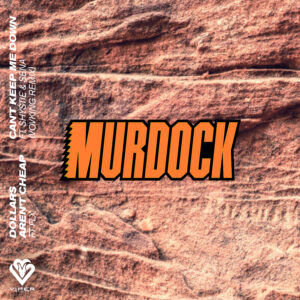 2019 saw the release of the legendary Murdock’s debut album on Viper, Stronger, packed full of upbeat, feel-good anthems, some of which have already amassed millions of streams – tracks like ‘Holding On’ feat. James Marvel and ‘Can’t Keep Me Down’ feat. Sena & Shystie. Not only has Murdock been smashing the streams; his album earned consistent support from major tastemakers like BBC Radio’s MistaJam and Annie Mac, not to mention huge support form the DJ circuit and beyond.
Now, Murdock smashes through a new decade with the first of several singles on Viper to continue the Stronger story. First up is a brand new original, ‘Dollars Aren’t Cheap’, featuring the country-esque vocals of FLX. Another genre-bending, enticing single, FLX draws the listener in with his earnest, heartstring-tugging-vocals before the track explodes gently into shimmering, vibrant drum & bass. Hints of horns add to the fun, as do elegant string and piano sections for an overall warm, comforting, organic track that highlights Murdock’s varied and impressive abilities as a producer.

The flipside is a remix of one of the album’s most well-loved tracks, ‘Can’t Keep Me Down’, taken on by Ukrainian producer VovKING. Opening on a much more ominous note, the track’s iconic vocals take the spotlight as the track slowly builds, evidently a much darker take on the original with shadowy drums and pounding basslines. The drop offers an alternative groove whilst the vocals maintain a powerful weight, transforming the track into something completely new while still paying homage to the original message.
As one of the most celebrated and positive influences in the drum & bass world, it’s no surprise the mighty Murdock found a home with the Viper family, and these latest two tracks are yet another of a series of highlights 2020 has seen so far.