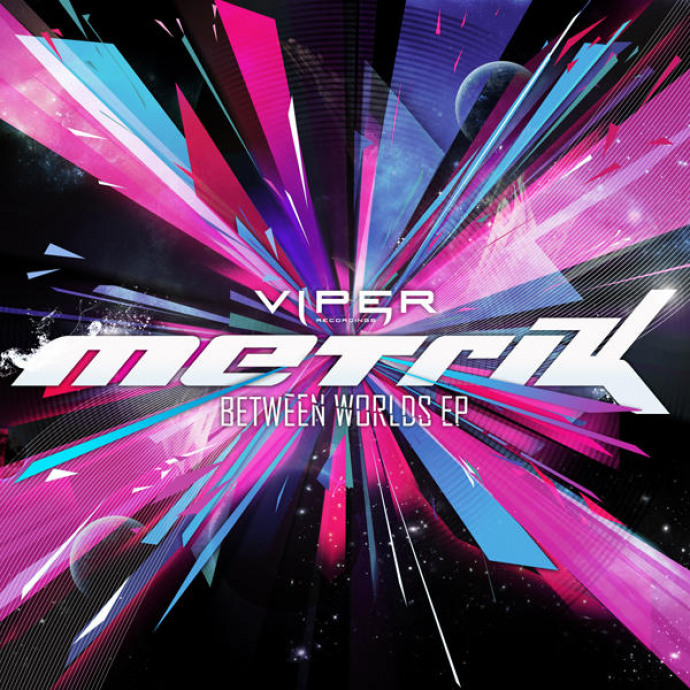 With his debut EP ‘The Departure’ firmly establishing him as one of Viper Recordings stars (and with a label that boasts releases from Matrix & Futurebound, Nero, DC Breaks, ShockOne, Brookes Brothers and Camo & Krooked this is no mean feat), uber producer Metrik is back with what is without doubt one of the labels all-time great releases. With last years ‘T-1000’ smashing it in the clubs (with support from Andy C, Pendulum, Fresh and Nero to name just four), and on radio (Annie Nightingale, Nick Grimshaw, Crissy Criss, John Kennedy, Eddy Temple-Morris all supporting), the last year has also brought a whole host of high profile artists looking for Metrik to lend his unique style to their tracks, leading to official remixes for Swedish House Mafia, Eric Prydz and Skepta.

If ‘The Departure EP’ was the launch pad, then the ‘Between Worlds EP’ truly is Metrik’s journey into the upper stratosphere of bass production. From the opening bass assault of ‘T-2000’ through the house flavoured soul of Kathy Brown (of ‘Love Is Not A Game’ / ‘Crazy World’ fame) collaboration ‘I See You’ and into the dubstep futuristic odyssey of ‘Between Worlds’ this new EP is nothing short of breathtaking. One moment hands in the air rave armageddon, the next sun kissed Ibiza anthem, this EP wrings every emotion while retaining the signature style that is making Metrik one of the most exciting new artists in the UK.

‘T-2000’
The follow up to last years massive ‘T-1000’, this takes the same rave-fuelled sonic template and mixes in the 170bpm drumstep flavour (half step drum and bass for those new to the genre!). Already causing the kind of moshpit lunacy only very rarely seen at raves, this is a pure club wrecker kicking off with nasty drumstep and switching up to devastating DnB at half way. As an opening salvo, this is pure  dancefloor destruction.

‘Genesis’
Having already explored, taken apart and mastered every other sub genre of DnB, Metrik now turns his hand to sinew snapping tear out. This is the sound of Viper at its nastiest. Lulling the dance into a false sense of security with an intro akin to an electro stepper, the twist comes at the drop with buzz saw synth bass, peppered with dubstep style machine gun stabs. Despite its filthy undertones, this tune still retains heart, the interjection of an 8 bit gameboy type riff giving euphoric lifts to the sneering bassline. May not appeal to Phil Collins fans.

‘I See You (feat. Kathy Brown)’
Having taken down drumstep, nasty DnB and dubstep, Metrik then stitches the flavour up once again with predictably amazing results. Another DnB smasher, ‘I See You’ is all about the Chicago House and soul vibes with a classic piano riff and incredible Kathy Brown vocal rolling over the intro until the drop lets the warm bass wash over the beats as the piano riff rolls along at pace. Peak time hands in the air goodness for those who love it deep, warm and full of soul.

‘Between Worlds’
Rumour has it that Ridley Scott is developing a prequel to Bladerunner and he needs to put the call in to Metrik as this tune perfectly encapsulates the bleak, neon lit doom laden dystopian future of that world. Channeling Vangelis, twinkling ethereal keys and harps rain
down alongside apocalyptic brass until the drop where the huge dubstep drums and rhythm accompany growling, crawling sub bass
alongside suspense strings and the return of siren call brass. Metrik’s masterpiece.

‘Nightdrive’
To complete the EP comes ‘Nightdrive’, a big room John B style electro stepper, ready to hit those peak time festival slots and keep the crowd bouncing rain or shine. This is the true sound of worldwide DnB, a step away from its jungle roots yes, but for those who like their  DnB in a two step jumping electro style, this is the big one for you.

“This is an amazing package…Metrik has smashed it” – Nero
“All Over this…T-2000 is the highlight of the set right now” – Pendulum
“Killer!!!” – DJ Hype