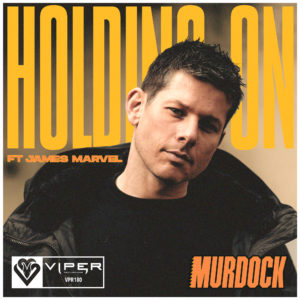 As a country, Belgium has played a central role in developing the sounds of drum & bass, as well as dictating its trends across a global market. One of the artists which has helped it stand out as a tastemaker is Murdock, renowned for both his own expert productions, his record label and his part in creating Rampage Festival, a world-renowned heritage site for thousands of ravers, hosting some of the scene’s biggest names every year. However, it’s now his own studio time which is about to take centre stage.

His forthcoming single is the first step towards a colossal project, an album which will see him uncover his biggest body of records to date. In October, he’s set to drop his ‘Stronger’ LP on Viper Recordings the record label where he has seen his biggest successes over the years and it’ll reinstate why he’s received such a pivotal role within the wider world of dance music, for both his influence and music.

‘Holdin On’ is the single which starts a journey for Murdock and he brings fellow Belgian James Marvel into the mix, with both providing the raucous, dancefloor energy they’re renowned for in a merging of their talent. Having already released on mainstay imprints such as Ram Records and Audioporn, his place on stages at Rampage Festival and as part of the Rampage Recording’s back catalogue has ensured that sonically, James Marvel and Murdock would cross paths. ‘Holdin On’ is the perfect example of why the two have brought their styles together; it’s both infectious and emotive, whilst also being underpinned with a growling underbelly of bass and drums which give it an added strength. Slightly distorted vocals and a humanistic melody are added into the composition, helping to create an anthem that stands out within any set. This may be your first look into what Murdock has in store for ‘Stronger’, but it hints at just how monumental this album will prove to be. Although with Murdock at the helm, this was sure to be the only outcome.