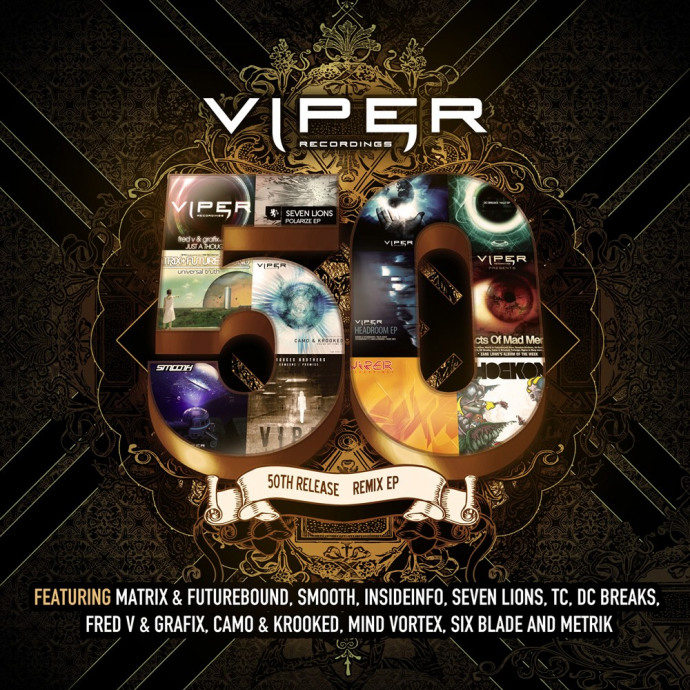 For nine years Viper Recordings has been at the forefront of pushing fresh new talent across multiple genres to the worldwide bass music scene. Since its inception by label boss Futurebound in 2004, Viper Recordings has seen some of the biggest and best names in the scene pass through its doors with an unbelievable roster of talent that has featured the likes of: Matrix & Futurebound, Nero, Brookes Brothers, Sigma, ShockOne, Smooth, Seven Lions, Camo & Krooked, InsideInfo, Koven, Metrik, DC Breaks, Moving Fusion, The Prototypes, Delta Heavy, Fred V & Grafix, State Of Mind, J Majik & Wickaman, L-Plus, Kove, Six Blade, Raw Theory, Maduk, Au5 and many, many more.

Showing no signs of slowing down, Viper Recordings have kicked off 2013 with a bang. With Matrix & Futurebound’s ‘Magnetic Eyes’ hitting #24 in the UK charts and becoming the 9th most played track in the UK on Radio 1 in the first quarter of 2013 , along with ShockOne’s album ‘Universus’ hitting #1 on the iTunes album charts in Australia, and the Brookes Brothers new single ‘Carry Me On’ being selected as Zane Lowe’s “Hottest Record in the World” on Radio 1, the future has never been brighter for the Viper family.

Having now reached its landmark 50th release in its illustrious history, Futurebound has assembled a massive remix EP featuring reworks of some of the most popular tracks from the Viper catalogue.

Camo & Krooked – ‘Feel Your Pulse’ (Mind Vortex Remix) [Drum & Bass]
Already one of the more fast paced tracks in the Viper catalogue, Camo & Krooked’s ‘Feel Your Pulse’ gets a hot-rodding from Ram’s Mind Vortex. Take the haunting vocals and alarming synths of the original and add Mind Vortex’s unique dark drums and rough bass stabs – and the result is a track somehow even more deadly than the original. Expect to hear this one in every set over the next few months.

Fred V & Grafix – ‘Just A Thought’ (feat. Reija Lee) (Smooth Remix) [Drum & Bass]
An anthem of last summer by the accomplished Fred V & Grafix gets a rethink by Viper’s very own Smooth. Giving the original a shot in the arm, Smooth’s remix builds on the strong melody and Reija Lee vocals, but adds that modern yet soulful combination of infectious bass and groove found in Smooth’s tracks such as ‘Virgo Cluster’ and his ‘Magnetic Eyes’ remix – just in time for Summer.

Metrik – ‘Between Worlds VIP’ [Drum & Bass]
Beginning with a futuristic, cinematic intro complete with Vangelis style synths and carefully chosen samples, ‘Between Worlds VIP’ sees Metrik update his original Dubstep version released on his ‘Between Worlds EP’ into a fast paced DnB ‘VIP’ version. Featuring the same epic synths and outrageous bass as the original but with added DnB energy, expect this one to get the crowd moving.