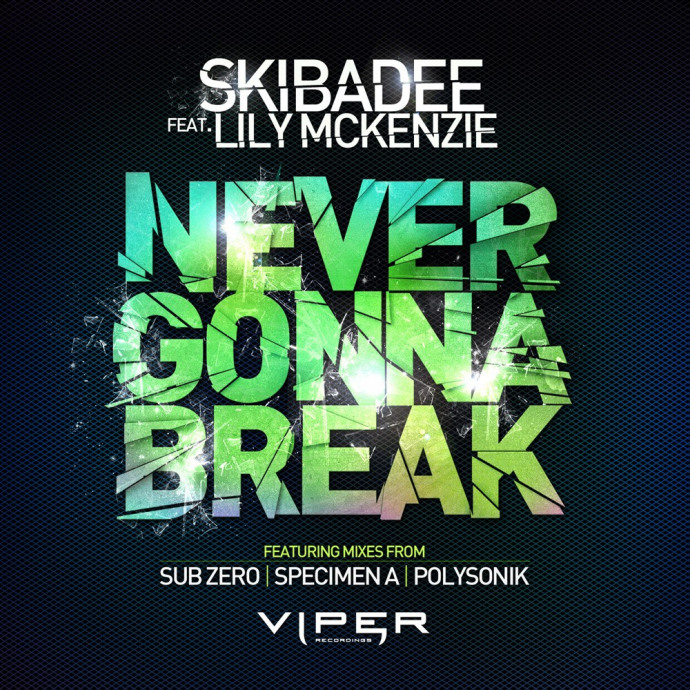 With Matrix and Futurebound’s anthemic ‘Magnetic Eyes (feat Baby Blue)’ still riding high in the clubs and breaking the UK Top 30 as well as earning a spot on BBC Radio 1’s and 1Xtra’s “A” playlist, Viper kicks off 2013 in style with the stunning ‘Never Gonna Break’. A combination of the tried and tested talent of the legendary MC Skibadee, the producing prowess of Jordan Crisp, and soulful vocals courtesy of Lily McKenzie, Never Gonna Break is the product of artists at the top of their game.

Dishing out his distinguished lyrical flow all over the world whilst earning countless awards as by the dozen, Skibadee has separated himself from numerous other MC’s to be regarded as an expert of his craft, becoming one of Drum and Bass’ greatest institutions. Lily McKenzie is also no stranger to the world of bass music. With numerous performances under her belt at the likes of T in the Park and XOYO, a feature on SBTV’s A64 and support from Radio 1, 1Xtra, Kiss 100, and Rinse FM, the multitalented vocalist now adds her delicate, soulful tones to ‘Never Gonna Break’.

Meanwhile, providing a melodic, crystal-clear backdrop for the two talented vocalists, Jordan Crisp takes on production duties for Viper’s first hit of the year. Producing for Skibadee since the age of 14, Jordan Crisp has not limited himself to DnB, composing for the UK box office topping film ‘Streetdance 3D’ as well as ‘Horrid Henry’ and ‘Streetdance 2 3D’. Now, the South London based producer joins forces with long-time collaborator Skibadee and Lily McKenzie to kick off the year in style.

‘Never Gonna Break’ [Drum & Bass]
Opening with orchestral flourishes and the stunning vocals of Lily McKenzie, ‘Never Gonna Break’ transforms into an anthemic slice of Drum and Bass. Combining infectious, disco tinged chords, an uplifting vocal chorus and Skibadee’s iconic lyrical flow, it’s little wonder that ‘Never Gonna Break’ is already tearing up clubs across the globe. Throw in the slick production skills of Jordan Crisp, and ‘Never Gonna Break’ has all the hallmarks of another highly polished Viper classic.

‘Never Gonna Break’ (Sub Zero Remix) [Drum & Bass]
Known for this gritty jump-up sound, Playaz Recordings Sub Zero’s reworking has already been named Crissy Criss’ “Ace of Clubs” on BBC Radio 1Xtra. Keeping the same crisp, vocal laden intro as the original, Sub Zero switches things up on the drop, turning ‘Never Gonna Break’ into a rave weapon. Sub Zero injects his own style with beefy kicks and powerful snares dominating proceedings, whilst a grimy, shifting bassline and huge switch up ensure this disrespectful remix will have the dancefloor moving as one.

‘Never Gonna Break’ (Polysonik Remix) [House]
Beginning with old skool chord stabs, the up and coming Polysonik transform ‘Never Gonna Break’ into a sumptuous House number. Featuring crystal clear production and a catchy bouncing bassline, Polysonik give the track a minimalist feel, and put the standout vocal talents of Skibadee and Lily McKenzie at the forefront of things. An accomplished production in its own right, Polysonik adds a new spin whilst keeping the crisp vibe of the original.