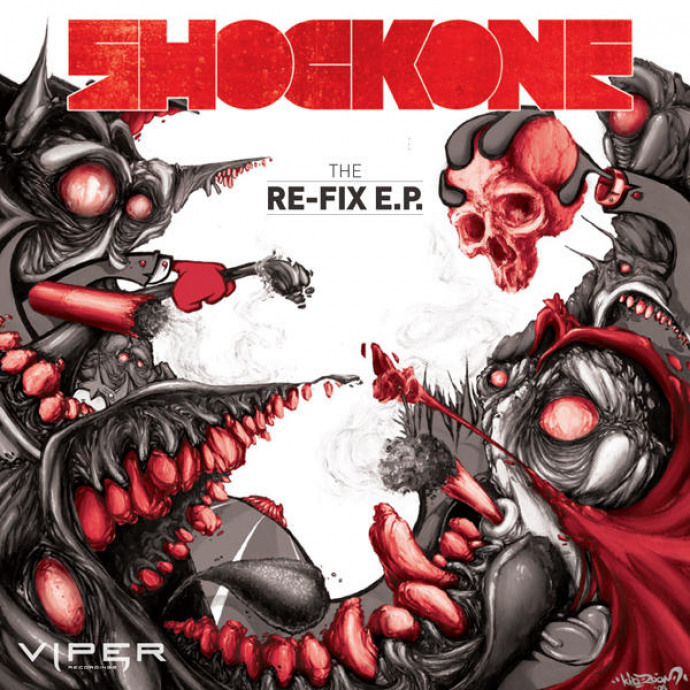 ShockOne is quite simply one of the hottest properties in drum and bass. 2009 proved to be a breakthrough year for ShockOne, first with the release of âThe ShockOne EPâ on Viper Recordings, featuring the huge anthem âPolygonâ which received the stamp of approval from Annie Mac on Radio 1 (calling it âthe biggest drum and bass track outâ) alongside high rotation playlisting on Australiaâs Triple J show. This was followed by ShockOneâs simply huge remix of the Brookes Brothers âCrackdownâ which was hammered by both Zane Lowe (âone of my favourite slices of drum and bass in 2009″) and Nick Grimshaw (âthis is a massive recordâ) â with Zane even pulling the rewind live on Radio 1! The track featured on last years critically acclaimed Viper Recordings album âActs Of Mad Menâ (Radio1 ‘Album of the Week’ & Mixmag compilation of the month).
With releases under his belt for labels such as Simon Bassline Smithâs Technique, Andy Câs Frequency and DJ Frictionâs Shogun Audio, ShockOne then signed on exclusively for Futureboundâs Viper Recordings and is currently hard at work in his Perth studio on his debut album, due for release early 2011. With special VIP versions of both âPolygonâ and âChronicâ tearing clubs apart on dubplate, ShockOne enlisted two of the most exciting new artists in dance to re-work tracks from âThe ShockOne EPâ to complete a devastating package which wets the appetite for ShockOneâs full length debut. Roll on 2011âŠ..
SHOCKONE
âTHE RE-FIX EPâ
RELEASED: 20TH SEPT. 2010
VPR028/VPR029
1. ShockOne feat. Reija Lee âPolygon (Dirtyphonics Remix)â
2. ShockOne feat. MC Spyda âChronic 2010â
3. ShockOne âPolygon (ShockOne VIP)â
4. ShockOne feat. Metrik & Phetsta âTrue Believer (Phetstaâs Dubstep rework)â
Download from the Viper shop: https://viper.databeats.com/product/vpr028/shockone-the-re-fix-ep

ShockOne feat. Reija Lee âPolygon (Dirtyphonics Remix)â
When the debut Radio1 play for a track is on Pendulumâs Essential Mix and when its first outing at Fabric is from the executioner Andy C (getting an instant rewind!) you know its already destined for anthem status. Winners of the âBest Newcomer Producerâ at the 2009 Drum and Bass Arena awards, the five strong production and live act Dirtyphonics have in the past year created some of the most boundary pushing, genre hopping records in dance music. With a string of tracks already out on Shimonâs AudioPorn label, this remix of âPolygonâ for Viper is set to be their biggest track to date. Moulding ShockOneâs original into an electro stomper, which then morphs into one of the biggest DnB drops of the year so far, this track has sent clubs into a frenzy in the past few weeks and will delight those who like their bpmâs and minds twisted to the max.

ShockOne feat. MC Spyda âChronic 2010â
A great MC once said âthe original was a killer, but this one is iller, certified, bona fide, dance floor fillerâ and never has this been more apt when considering ShockOneâs 2010 version of âChronicâ. Ragga tinged dancehall drums alongside huge cavernous low-end has made this track an instant favourite of the more grimy dancefloors and of those who like their Drum and Bass with a different step to the norm. The track features the unmistakable vocals of MC Spyda who as well as being one of the most in demand MCâs in the scene, has also been responsible for vocaling some of the biggest tracks in Drum and Bass, including teaming up with Pendulum and DJ Fresh for âTarantulaâ and Matrix & Futurebound for âKnite Riderzâ.

ShockOne âPolygon (ShockOne VIP)â
Once again featured in Pendulumâs recent Essential Mix for Radio1, the forums have been ablaze with excitement about the forthcoming release of the ShockOne VIP of âPolygonâ. For the last few months the dubplate has been rinsed all over the world with the speculation being that this would never see the light of day. However with a track this infectious, it would have been sacrilege not to give it a release. Taking the originals instantly recognisable clipped female vocal and adding a huge, set starting atmospheric half time intro, the track builds on the awesome hooks of the original, adding extra intensity to the drop, and then switching up and adding an acidic twist to the b-line to make this another essential re-fix of an already classic track.

ShockOne feat. Metrik & Phetsta âTrue Believer (Phetsta Dubstep rework)’
Taking the piano driven old school rave bomb of âTrue Believerâ and turning into something even more insane and grimey was never going to be an easy task, but in his dubstep remix, Phetsta has delivered in spades. Turning the paranoia up to 11, the original vocal is retuned over metallic bass and skipping jittering drums. This is as futuristic and dark as it comes. With Viper Recordings first dubstep track (ShockOneâs âAdachigahara’s Themeâ) staying at No.1 on the beatport dubstep charts for over a month (and still currently in the Top 100 over 73 weeks after its release), to say this is highly anticipated is an understatement. Equally at home over a range of bpm, fellow Perth resident Phetsta has seen releases on Aquaskyâs Passenger recordings and a string of releases on Simon Bassline Smithâs Technique recordings find their way into the boxes of Annie Mac, Pendulum, Andy C and Grooverider to name just four!