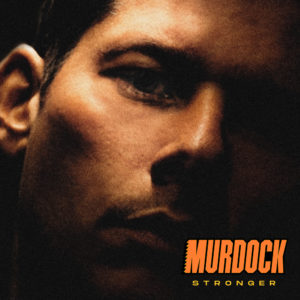 Murdock’s debut album is about to land on Viper Recordings and it’s a snapshot of what the label has achieved within its fifteen years of history. They’ve been able to provide a platform for an artist like Murdock, one of the most notable figures across drum & bass and one who has repeatedly provided a place for artists to showcase their records at his formidable Rampage Festival in Belgium. However, it’s his music which has recently caused just as much attention.

Following the singles which have proven that Murdock’s just as much of a producer as he is a ground breaking curator, ‘Stronger’ is looking to capitalise on its journey for its full release. One look at the LP’s packed track listing gives weight to this fact.

With names like Jenna G, Shystie, Roni Size and Errol Dunkley all making an appearance, Murdock has joined forces with many artists who have individually made an impact on the drum & bass scene and ‘Stronger’ is a celebration of the genre Murdock has committed to pedestalling. After the release of ‘Let it Go’ ft. M’Leah, ‘Holding On’ alongside James Marvel and ‘Dark Cloud’ with Dynamite MC, Murdock returns with a host of new music. Tracks like the soul infused ‘Make Me Stronger’, featuring Jenna G on vocals, as well as collaborations ‘Double Dutch’ with Roni Size and ‘Breathe’ where Goldi Phone Home lends her talent all reveal the first part of the album’s fresh sounds.

‘Horizon’, ‘All Day All Night’ ,’Alien’ and ‘Ruby Moon’ are all stand alone offerings from Murdock on a packed album full of exclusives and they all highlight a different part of his production spectrum. The jungle mix of ‘Different Way’ and the hip-hop version of his and Dynamite’s ‘Dark Cloud’ nod to Murdock’s vast influences, something which his production boasts. Then Shystie & Sena’s appearance on ‘Can’t Keep Me Down’ and Sunday Rose on ‘Lay Down’ add more emotive touches to its catalogue. Meanwhile ‘Panic Attack’, created with the help of Doctrine, still pays homage to the dancefloor prowess Murdock has been notorious for, packaged for the LP alongside a huge array of musicality from the producer.

‘Stronger’ is an incredible feat. With a forthcoming Rampage takeover set for this Winter at London’s seminal Fabric nightclub and an international touring schedule ahead of him, Murdock has dedicated 2019 to be a defining moment in his career. Although following a host of outstanding achievements throughout his path this is no small claim and as a result ‘Stronger’ found the perfect home at a label like Viper Recordings, who push ‘Stronger’ forward with nearly two decades worth of experience.