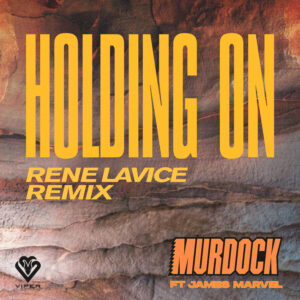 Ending the year on a high note and celebrating one of the biggest albums of 2019, Viper are proud to present the Rene LaVice remix of Murdock and James Marvel’s now iconic track ‘Moving On’. Following a slew of diverse remixes released over the course of 2020 from the likes of Enei, AC13, and VovKING, the next new name to join the Viper family is none other than Canada’s hottest drum & bass export Rene LaVice.

A household name in the genre, Rene LaVice has made a name for himself as a heavyweight producer known for is chart-topping singles, the current face of drum & bass on BBC Radio, and owner of his Device label. Now, Rene LaVice steps up to remix a track from fellow legends Murdock and James Marvel with his take on ‘Holding On’.

Maintaining the jovial original vocals, Rene LaVice keeps the positive energy flowing while making it completely his own. Any semblance of familiarity disappears quickly with the first drop, where Rene dishes out plenty of his signature pounding basslines and snappish snares for what is sure to be a dancefloor favourite.

A true transformation, this remix is easily recognisable as the work of one of drum & bass’ most influential players, flawlessly fusing together each parties’ signature sounds. Viper are humbled to release this record, a fitting tribute to one of the genre’s biggest albums, and a strong indicator of what to expect from the complete Stronger Deluxe package, due for release in early 2021. Watch this space for more remixes of some of Murdock’s most beloved tracks and more than a few surprises.