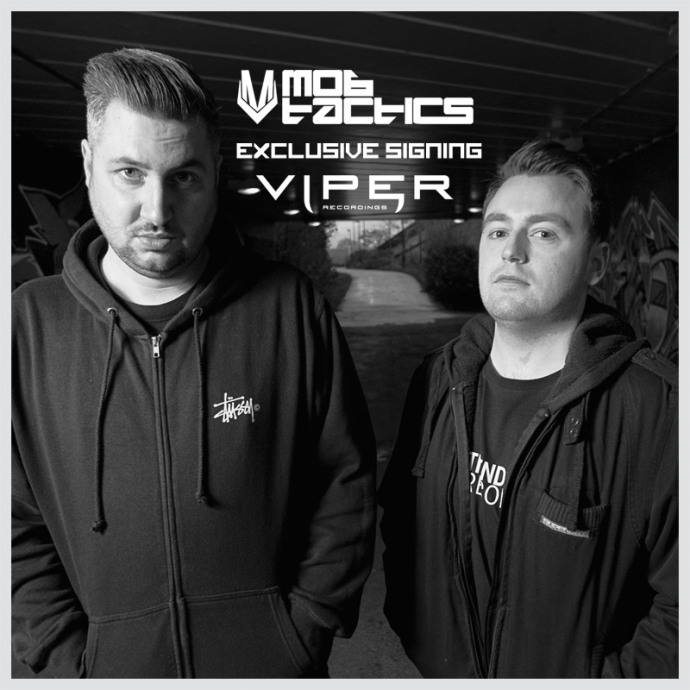 Viper Recordings are proud to announce their latest exclusive label signing, Mob Tactics. Luke Budgen & Mark Sims (aka Mob Tactics) seem to be a name on people’s lips more and more of late. Already renowned for their inimitable style of techy – yet very funky, dancefloor orientated Drum & Bass, the duo appear to be going from strength-to-strength with each release. Their tunes are already firm staples in the sets of Andy C, Friction, Matrix & Futurebound, DJ Hype and Audio, to name but a few, and the demand for them on the DJ circuit is rapidly gaining momentum. Heavily influenced by the likes of Ed Rush & Optical, Bad Company, Konflict and Total Science, you can always guarantee a Mob Tactics release or DJ set will be nothing short of high octane.

Luke and Mark first met in 2009, when Luke, who was running the music department at Chemical Records, signed some of Mark’s tunes to their in-house imprint: RUN DNB. After instantly hitting it off and realising their musical tastes were so similar, the two decided to hit the studio in early 2010. The first weekend at Mark’s studio they managed to create ‘Gunjack’ and the following weekend at Luke’s, they knocked out ‘Stick-up Kid’ – both of which went on to garner support from DJ Hype, Bailey & Crissy Criss, and were subsequently released a few months later on Traffic Music. Mob Tactics was born.

Fast forward a few years and the boys are in full swing. 2011/2012 saw several releases on the duos own imprint: Tactical Recordings – including the critically acclaimed ‘Kansas’ and a track for BTK’s Dutty Audio label entitled ‘Prang’. But it was 2013 that proved to be the most successful year to date. The dancehall tinged hit: ‘Crazy Hype’, featuring ragga legend, Elephant Man, was snapped up by Playaz. Their remix of Cause4Concern’s early 2000 anthem: ‘Soul’ went on to feature in the sets of just about every man and his dog! Prolix snatched up ‘Grotbags’ for his Trendkill imprint, and legendary Andy C signed up ‘Wolf Trap’ exclusively for the sixth installment of his hugely successful ‘Nightlife’ compilations.

2014 saw no sign of slowing down with releases on Chase & Status’ MTA Records, including ‘The Answer EP’ and the single ‘Gasp For Breath’, along with tracks featured on UKF Bass Culture, Ram Records ‘Ram Miami’ and ‘Ram Life: Audio’ compilations.

Now moving into the next chapter of their careers, Mob Tactics have signed exclusively to Futurebound’s Viper Recordings label with their debut single ‘Neon God’. Walking the fine line between uplifting and underground, ‘Neon God’ signals the exclusive and triumphant pairing of Viper Recordings and Mob Tactics which is going make a lot of noise, both figuratively and literally.