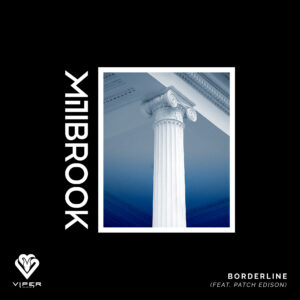 Hot on the heels of ‘All Night’, the illustrious single featuring the voice of Selin that was met with high acclaim this past July, Millbrook is back once again with another soon-to-be-hit, this time in the form of ‘Borderline’. Proving to be an unstoppable force in the world of drum & bass, Millbrook has earned support from all the scene’s most crucial players in a relatively short amount of time, including UKF, Magnetic Magazine, Liquicity, Spotify, BBC Radio 1, GeorgeFM, and more, not to mention consistently high praise from his DJ peers and idols.

Since starting early last year with singles like ‘The Rise’ with Vorso and Mad Hed City, ‘Go Numb’, ‘What Now’, remixes for Matrix & Futurebound and Dossa & Locuzzed, and plenty more, Millbrook has established himself as a force to be reckoned with, releasing regularly and with impressive diversity.

Latest in a slew of high calibre tunes is ‘Borderline’ featuring Patch Edison, whom Millbrook last worked with on his remix of ‘Blinded’ by Dossa & Locuzzed. A poignant, emotive track right from the start, Millbrook’s thoughtful productions are met with the earnest voice of Patch Edison, singing of struggles of self-doubt and insecurity many of us are all too familiar with.

A carefully crafted and symbolic tune, the drop serves to blast away any feelings of doubt with resounding, erupting bass, adding to the emotional pull of the song. A track guaranteed to take your breath away, Millbrook has really outdone himself with this one, and will only further cement his position as one of the most talented newcomers of the last two years.

Consistently proving to be a stronghold in the Viper family, Millbrook’s productions are second to none. Demonstrating a diverse ability to craft a plethora of different sounds and moods, this latest release is certainly a highlight in what has been an incredibly successful year for Viper Recordings.