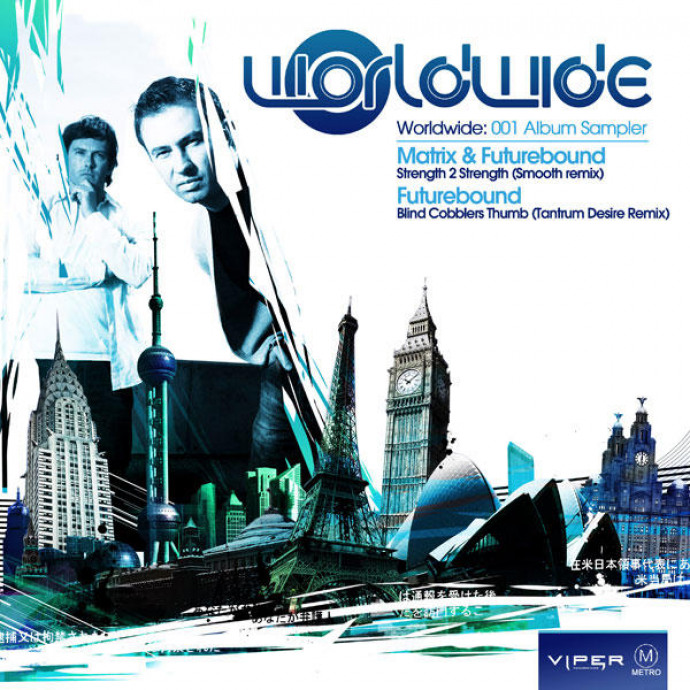 From humble beginnings, the sound of drum and bass has gone on to reach out into every corner of the globe, each new country helping to influence and shape the music into what has unquestionably become a worldwide phenomenon. With the drum and bass scenes in everywhere from Brazil and Japan to Australia and Russia now as strong as the almost 20 year old UK scene, Matrix & Futurebound have come together on âWorldwide:001â to showcase the music and artists which continue to make drum and bass one the most innovative and exciting genres in the world today.

With their productions continually at the front of every A-List DJâs boxes, a packed schedule of shows around the world and an unparalleled ear for the next big thing, Matrix & Futurebound are ideally placed to showcase the freshest beats of 2011. The first in a series, âWordwide:001â is a perfect snapshot of electronic dance culture in 2011, keeping a sharp focus on the freshest Drum & Bass around whilst also drawing on Dubstep and electro to capture the sound of a Matrix & Futurebound performance in all itâs glory.

Matrix & Futurebound âStrength 2 Strength (Smooth Remix)â
In less than 12 months, Smooth has gone from bedroom beat-making to gaining the support of some of the biggest names in DnB, including Pendulum who featured two of his tracks in their recent Radio 1 essential mix. Now signed exclusively to Futureboundâs Viper Recordings label, his signature style of soaring vocals above heavy club beats and bass (heavily influenced by the sound originally pioneered by Matrix & Futurebound themselves) made him the obvious choice produce a new take on their classic track âStrength 2 Strengthâ which originally featured on Matrix & Futureboundâs seminal âUniversal Truthâ album. Smooth takes the originals now familiar disco diva vocals, contorting, clipping and twisting them over off-beat synths and titanium hard 2011 snares. In addition he introduces a new accapella breakdown before the first drop and a rampaging stadium dnb build before the second. Both will guarantee hands in the air anywhere in the world. The genius of this mix is that on one hand, it sticks very closely to the elements that made the original such a classic while simultaneously sounding like a brand new record, entirely in keeping with Smoothâs current work. A classic update of a classic original.

Futurebound âBlind Cobblers Thumb (Tantrum Desire Remix)â
Production team Tantrum Desire burst onto the scene in 2008, signing exclusively to Drumsound & Simon Bassline Smithâs Technique recordings with their subsequent original tracks (such as Freeze, Failure To Engage) and scene stealing remixes (of Bassline Smithâs âCape Fearâ and âWelcome To The Jungleâ and Shimonâs âThe Smokerâ) regularly finding their way into the boxes of the DnB A-List such as Grooverider, Jumping Jack Frost, Hype and Ray Keith. On their first tune for Viper Recordings / Metro, the trio have been enlisted to put their own stamp on the very first single to be released on Viper Recordings, Futureboundâs bassline bounce classic âBlind Cobblers Thumbâ. Keeping the originals instantly recognisable lead riff and adding in layer upon layer of intense rave fueled synth mayhem, this is a club banger and no mistake. Anyone familiar with Tantrum Desire will know the destruction their signature sound causes in clubs (beware on your home speakers, their dubs will tear anything but the most sturdy system to shreds), and this is possibly their finest moment yet. Probably the best jump up record you will hear all year. 2011âs bouncing bomb. Come On!

âWorldwide:001â will be released as a double CD and digital download with an epic 36 track 70 minute mix from Matrix & Futurebound on CD1, with 15 exclusive unmixed tracks on CD2. In addition 10 of the biggest exclusive tracks will be released on vinyl across 5 x limited 12″ singles.