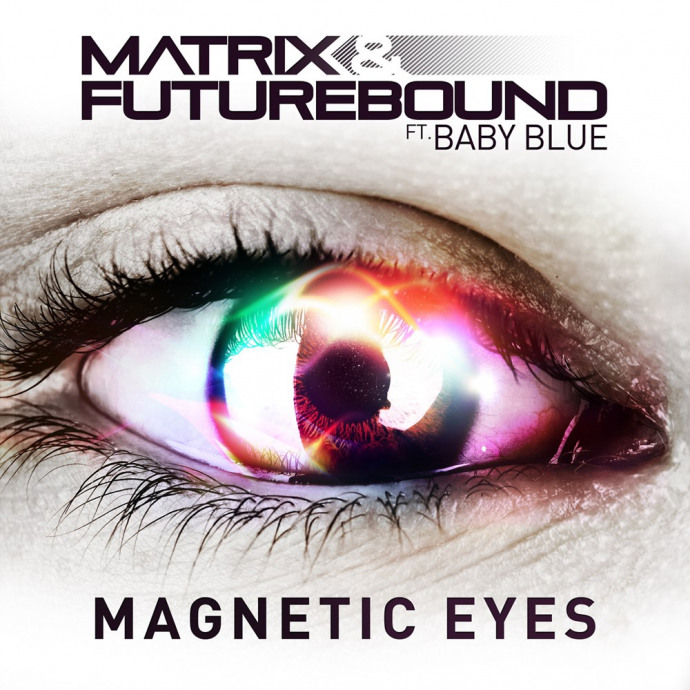 2012 has already been one of the biggest years yet for the legendary duo, with the euphoric sounds of ‘All I Know’ (feat Luke Bingham) sending tremors across the Drum and Bass scene and beyond. Featuring the silky smooth ‘Rolling Out Mix’ and the dancefloor destroying ‘Smash & Grab Mix’, Matrix & Futurebound have smashed clubs and dominated the airwaves worldwide. One of this summer’s defining anthems, ‘All I Know’ clocked in well over 2 million combined views on YouTube and was quickly added to BBC Radio 1 and 1Xtra’s prestigious playlists, gaining support from the likes of Zane Lowe, Annie Mac, Fearne Cotton, Annie Nightingale, MistaJam, Westwood, Friction, and Crissy Criss.

Now, after turning out a couple of massive remixes for Afrojack and Rude Kid, Matrix & Futurebound return with the vocal anthem ‘Magnetic Eyes’ (feat Baby Blue). Having already worked with the likes of Sway, John Legend, Estelle and Madness, Baby Blue is no stranger to the bass music scene. One of South London’s finest exports, the talented singer/songwriter and musician now joins forces with DnB’s hottest production duo for another slice of drum and bass in its highest form.

Already on the BBC Radio 1 and 1Xtra “A” list and the MTV Dance playlist, ‘Magnetic Eyes’ has quickly gained heavy support in the clubs and on the radio, with DJ’s such as Drumsound & Bassline Smith, Nero, Pendulum, Tantrum Desire, DJ Hype, ShockOne, Brookes Brothers, Seven Lions, Netsky, and Far Too Loud all dropping it into their club sets, along with high rotation on radio, day and night.

Boasting a huge remix package including the Trap flavoured sounds of TC, an adrenalin fuelled Drum and Bass remix from Viper’s own, Smooth and a Breaks reworking by Pyramid, ‘Magnetic Eyes’ is set to make shockwaves across the entire bass music scene.

‘Magnetic Eyes’ (feat. Baby Blue) [Drum & Bass]
Combining slick production skills with the lyrical prowess of Baby Blue, ‘Magnetic Eyes’ delivers one of the most iconic songs of the year. A blend of soaring synths, uplifting, soulful vocals, and an infectious chorus, it’s impossible not to sing along to ‘Magnetic Eyes’, which features all the hallmarks of another Matrix & Futurebound classic.

‘Magnetic Eyes’ (Smooth Remix) [Drum & Bass]
Without doubt one of the most exciting producers in the Drum and Bass scene today, Smooth has been turning heads with his unique production style ever since his first release on Viper in 2009. Now, before the release of his hugely anticipated ‘Virgo Cluster’ on Viper Recordings, the young producer adds his golden touch to ‘Magnetic Eyes’. Keeping the bold chords, Smooth transforms the slick sounds of the original into a dancefloor weapon. A combination of relentless morphing bass, infectious chords and complex drums, Smooth’s latest remix hits it out the park.

‘Magnetic Eyes’ (TC Remix) [Trap]
Originally known for genre defining classics such as ‘Borrowed Time’ and ‘Rockstar’, TC has continued to produce hit after hit, with tracks such as ‘Bass by the Tonne’ and ‘Do You Rock’ being a no-brainer in every mix, podcast and rave for months. Now turning his hand to Trap, TC expertly chops and slices the euphoric vocals of Baby Blue, making them work over an attitude filled Trap beat. Featuring a mischievous, catchy bassline and crystal clear percussion as you’d expect from TC, this one is already a favourite in the clubs.

‘Magnetic Eyes’ (Pyramid Remix) [Breaks]
Kicking off with the same euphoric vocals and melodic chords of the original, Pyramid’s reworking begins in a chilled fashion. However, after a buildup full of anticipation, Pyramid’s remix drops without warning into a mesmerizing roller coaster of growling, vocal basslines, fizzing synths and solid drums. This is another remix designed to deal damage in the rave. Throw in the soulful vocals of Baby Blue, and the result is a perfect blend of melody and raw, sonic aggression.