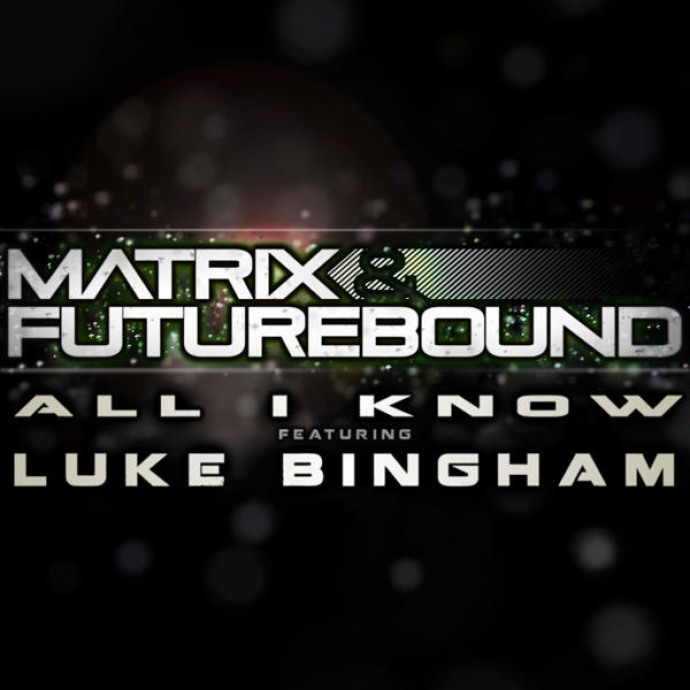 Matrix & Futurebound are back. For most, it will seem like they never went away as in the 5 years since their landmark debut album ‘Universal Truth’ the duo have never let up the pace. With their respective labels Viper and Metro continuing to be at the forefront of electronic music’s cutting edge, their packed schedule of DJ shows taking them to every corner of the globe in addition to last year’s Matrix & Futurebound – Worldwide: 001 mix album, the pair have been busier than ever. That said, ‘All I Know’ begins an exciting new chapter for Matrix Futurebound as it represents the first single to be taken from their forthcoming (as yet untitled) sophomore album which is due towards the end of 2012. If ‘All I Know’ (featuring the vocal talents of hotly tipped newcomer and BBC Introducing artist, Luke Bingham) is the opening salvo, then to say anticipation will be high for the new album is a huge understatement.

Since early releases on scene defining labels such as Virus Recordings, Moving Shadow, Infrared, Hospital, Ram and Breakbeat Kaos, Matrix & Futurebound have long since established their own critically acclaimed imprints with the continued success of the Viper and Metro labels. The pair have tirelessly worked to bring through new talent, being instrumental in the careers of artists such as DC Breaks, Sigma, Nero, Fred V & Grafix, Camo & Krooked, Brookes Brothers and some of 2012’s hottest new artists in the shape of ShockOne, Smooth, Metrik, InsideInfo, Kove, Seven Lions and Chords. In addition, their career of club anthems has seen them enlisted to remix artists such as Justin Timberlake, Swedish House Mafia, Moby, Snap, and Skepta.

‘All I Know’ (M+F’s Rolling Out Mix)
Drum and bass rarely employs male vocalists outside of the club MC style, and even then it’s usually the more liquid styles of vocalists like Robert Owens that get the nod. As ever, Matrix & Futurebound break the mould and continue to push the sound forward of the genre they were an integral part of creating in bringing in the incredible talents of Luke Bingham to add his energy driven vocal flair to their own unique style of future proof production.

Using filtered French house style chords throughout, this takes the track into pure euphoria with sky scraping synths lifting Luke’s vocal to emphasise the good time vibes and turn down the punishing bass. Already being smashed on Radio 1 by Annie Mac, Zane Lowe and Annie Nightingale, the production really helps to showcase the strength of both Luke’s vocal and Matrix & Futurebound’s production.

‘All I Know’ (M+F’s Smash n’ Grab Mix)
Kicking off with the vocals from the start, alongside epic stadium style bass booms and mid-range crescendo horns, the track shows why it has been a guaranteed set starter for so many on dub. Teasing the chorus before the drop ensures the hook will be remembered by all before bass shaking hell breaks loose at the drop. In true Matrix & Futurebound style, musicality is married to club wrecking destruction as devastating bass intertwines with Luke Bingham’s hook laden melodies, rave stabs punctuating staccato style throughout.

So rare for any club track, this is hook heavy sing along business while simultaneously retaining rewind demanding heaviness and bass toughness. The song itself is an empowering fist of defiance to keep striving for bigger and better whatever others say, and this in microcosm is a mantra that can be used to describe Matrix & Futurebound – always pushing boundaries, always looking forward and always delivering the goods. This is all they know.

Free MP3 of Matrix & Futurebound – ‘Biology’ when you ‘pay with a tweet’: