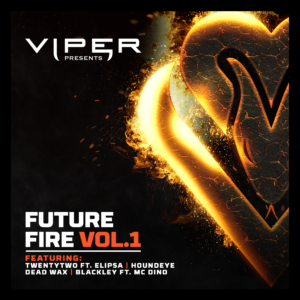 The concept behind the forthcoming ‘Future Fire’ EP from Viper Recordings was simple; the label team brought together the very best demos which were filtering through their inbox from newcomer artists, and created packages to drop on an audience they’ve spent building for nearly two decades.

It signals a new wave of artists making their way within the Viper Recordings camp, spearheaded by label boss Futurebound and providing a pillar for the genre through the artists they’ve helped nurture who’ve since gone on to have illustrious careers. The ‘Future Fire’ series will be no different.

Over the last 18 years Viper Recordings have become synonymous with exceptional A&R, the quickest of flicks through our back catalog showcases a plethora of the scene’s biggest names. Label boss Futurebound’s impeccable ability to spot talent means we’ve seen the likes of The Prototypes, Camo & Krooked and Sigma, to name a mere few, all through the doors of the label. Fans of the Viper radio will know the Future Fire concept, a moment in the show where Futurebound introduces us to drum and bass’s most promising acts, now here at Viper Recordings we’re taking it a step further and releasing a whole EP filled with the hottest new talent exclusively selected by the head honcho.

To kick off the release we have Twentytwo with Elipsa on vocals for opening record ‘Energy’. With Elipsa’s dreamlike vocals sifting in and out of the mix, it’s easy to see why Twentytwo is gaining a reputation for merging soulful production with moodier underpinnings. Grinding bass channels smash through the mix despite its emotive build up and it shows a different flavor to an already impactful release.

Next up are the pounding dancefloor sounds of Houndeye’s ‘Falling Awake’. Adding another diverse yet hard-hitting take to the EP’s tracklist, Houndeye goes for the jugular with his offering. Filled with slamming drums and synth-led breakdowns, it highlights a flipside to Houndeye’s usually more laid back rhythms.

Next up comes newcomers DEAD WAX with a weighty slab of tear out. ‘Get Up’ bares all the hallmarks of the very best gutter scrapping jump-up, screeching synths and metallic scratches make up the melody of the track, with touches of nostalgic gameplay added to amp up the fun.The drum patterns; crisp and hard-hitting work in a balanced juxtaposition with the low squelching bass.