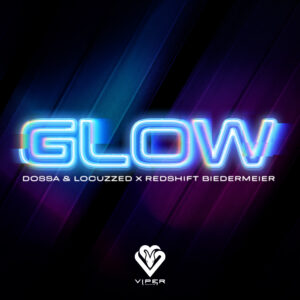 Austrian drum & bass duo Dossa & Locuzzed have a long standing history with Viper Recordings. Spending many years crafting their careers alongside the label, which has spent nearly two decades curating its roster, they’ve risen from strength to strength under the imprint’s guidance which eventually led to the release of their debut LP ‘Resonate’ in 2019. Since then, they’ve followed suit with a plethora of singles and reworks for the likes of Liquicity and High Tea Music, helping to solidify their place within the wider genre’s ecosystem. For 2022 they make a comeback on Viper Recordings, following their addition to the ‘18 Years of Viper’ compilation with the fan favourite “Love Blind” and reintroducing fans to their unique style and a production standard which is second to none.

‘Glow’ is the latest single from Dossa & Locuzzed and their stamp is instantly recognisable. The duo’s instrumental training kicks in and is morphed around a seismic build up; distorted by their sonics, the track’s sounds also sit alongside the vocals of singer Redshift Biedermeier, who adds a harmonic trist to its harder underpinnings. Dossa & Locuzzed aim for the dancefloor with this forthcoming release, but without dropping any of their jazz-infused signature marks, something which seeps into every one of their records.

Bringing their noise back to Viper, the Austrian production outfit again proves their individuality under its banner. ‘Glow’ is the start of what’s to come now that European dancefloors are in full swing once more with Dossa & Locuzzed at the helm.