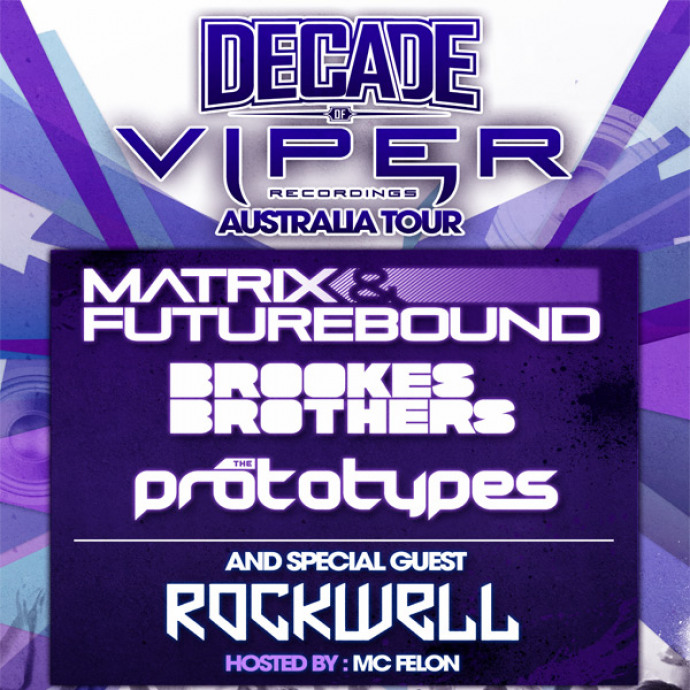 Viper Recordings’ “Decade World Tour” is coming down under to celebrate 10 years of releasing fresh, forward thinking music. After selling out shows across the UK and Europe, now the biggest heavy-hitters that the mighty imprint has to offer are touching down in Adelaide, Sydney, Perth & Melbourne this July for what is surely the biggest drum & bass club tour of Australia this year!

Sitting at the top of the bill are bass music power-house duo and Viper boss “Matrix & Futurebound”. After smashing up the Australian festival circuit in 2013 as part of the Stereosonic Tour, the pair has once again risen to new heights with the release of their biggest hit to date, ‘Control” (feat. Max Marshall). With huge support on BBC Radio 1, 1Xtra, Capital FM, Minstry of Sound Radio and XFM, ‘Control’ cracked the UK Top 10 and charted #7 in the singles chart and #2 in the Dance charts – a level of success matched only by a select few in the Drum & Bass world. Staying true to their roots, they also dropped their own club mix of ‘Control’ with their techy ‘S.T.F.U. Mix’. A throwback to the early days of the partnership. Matrix & Futurebound proved without a doubt that they could achieve both high chart positions, while still maintaining heavy support in the clubs.

One of the most respected partnerships in drum & bass the “Brookes Brothers” are no strangers to Australia, with 5 previous sell-out tours under their belt. Known for their unique, soul and disco infused beats, the Brookes Brothers are one of the genres most accomplished production teams. In late 2012, the legendary duo signed exclusively to Viper and in August 2013 released ‘Carry Me On’ (feat. Chrom3) to high acclaim, being selected as Zane Lowe’s “hottest record in the world”, as well as making the BBC Radio 1 and 1Xtra playlist and hitting #7 on the UK Independent Charts. With a new album in the works for 2014 the most exciting chapter so far for the Brookes Brothers is about to emerge.

Brighton-based producers and DJs “The Prototypes” have exploded onto the scene over the past few years and there’s been no looking back for the duo and their polished brand of dancefloor-destroying drum & bass. Having made their debut in 2010 The Prototypes quickly became one of the most hotly-tipped production duos in the scene and have since built a reputation for putting out instant dancefloor weapons and consistently smashing any and all remixes. Entering into the next chapter of their careers, The Prototypes have now signed with Viper Recordings and released their first album single “Pale Blue Dot/Lights’ in February 2014. With their debut album to be released in 2014 the future has never been brighter for one of the most exciting production outfits in recent years.

Completing this all-star line-up is featured special guest “Rockwell” aka Thomas Green. Signed exclusively to Friction’s Shogun Audio imprint, he is without question one of the most original and talented producers to come out of the drum & bass scene in recent times. His productions are painstakingly constructed, beautifully arranged and thoughtfully mastered. Each track offers unique textures seldom heard in electronic music – let alone drum & bass – and his signature sound is one of the few that works just as well in the living room as in the club. As a DJ Rockwell has built a reputation for his eclectic sets, with crowds never knowing what he’s going to pull out of his bag next he has quickly established himself as one of the most exciting DJs in dance music.

In Addition to the Decade Tour, Matrix & Futurebound will be touring New Zealand on the following dates: