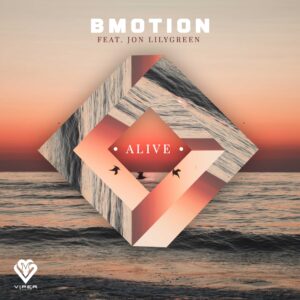 After nearly a year hiatus, Viper’s own BMotion returns at long last with ‘Alive’.
BMotion has long been a staple in the Viper family, from his most recent track ‘Lust’ with Jack Mirror, to being asked to remix Moby’s iconic ‘A Simple Love’. BMotion has also remixed Koven’s ‘From The Start’ and The Brookes Brother’s ‘Good To Me’, collaborated with Dossa & Locuzzed on the fan favourite ‘Love Blind’, and with Cyantific on ‘Cyborg’, to name but a few of his most memorable tracks. Earning huge support from Netsky, Friction, Metrik, ShockOne, DJ Marky, Matrix & Futurebound, and many more early on, BMotion has built a more than impressive repertoire since signing to Viper in 2014.

Now, a year since ‘Lust’ was released on the famous Acts of Mad Men Vol. 2, BMotion is back in a big way. Teaming up with Jon Lilygreen who was featured on some of BMotion’s earliest releases, the pair show their glow up with their first collaboration in over 5 years.

An enigmatic dancefloor number, Jon Lilygreen’s voice lures you in together with BMotion’s knack for creating enthralling openings. The epitome of dancefloor drum & bass, ‘Alive’ exudes charisma and charm, delivering a magnetic ambience that makes it truly irresistible. Colourful, bright, and full of life, the track lives up to its name and then some.

Living up to all expectations and then going even further, BMotion has unquestionably proven that good things are worth the wait. After a year spent honing his already noteworthy skills, BMotion shows us that he’s certainly still got it, delivering a future anthem set to please old fans and entice a generation of new ones. An irreplaceable member of the Viper family, we are thrilled to present this latest single from BMotion on the label.