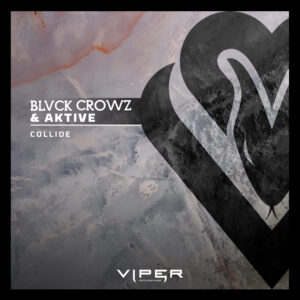 Since joining the Viper Recordings camp in 2021, BLVCK CROWZ has become a certified one to watch, dominating the new wave of jump up with tracks such as ‘Jungle Demon’, ‘Waiting 4 U’ with Cyantific, and ‘LIFT U UP’ with ESKEI83, proving the hype to be substantiated every time. His latest track ‘Collide’ sees BLVCK CROWZ team up with up-and-comer Aktive who’s no stranger to Viper, hotly tipped by tastemakers such as Radio 1’s Rene LaVice and featured on some of the label’s most beloved compilations.

Now, for their first release of the year, BLVCK CROWZ and Aktive team up to deliver a hearty dose of unadulterated, unapologetic jump up drum & bass. The energy is high from the get-go with rocking electric guitar riffs setting the tone for the intro, before the vocal introduces an uplifting message of pushing through your barriers. Using exciting and action-packed imagery of cosmic crashes and breaking boulders, BLVCK CROWZ and Aktive invite fans to ‘Collide’ with the path which leads to the best version of themselves.

Bringing the heat into the new year, ‘Collide’ unquestionably ticks the box of ‘dance-floor destroyer’- packed full of pure, party inducing punch from both BLVCK CROWZ and Aktive – be sure to keep an eye out for more, only on Viper.