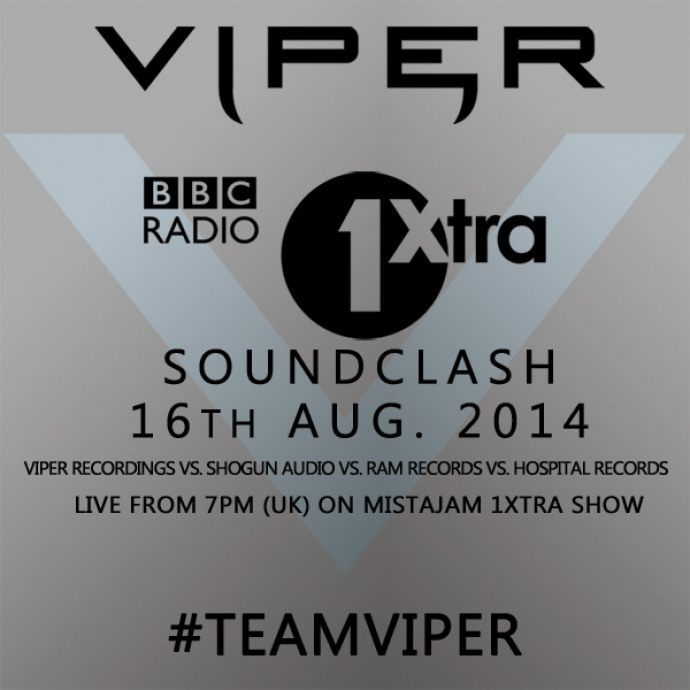 Prepare yourselves! This Saturday, 16th August 2014 at 7pm British Summer Time broadcasting history will be made as Mistajam welcomes four of the biggest labels in drum & bass to his BBC Radio 1Xtra studio for two hours of total soundclash madness!

Viper vs Hospital vs Ram vs Shogun: 19 artists, four labels, two hours, one winner. Artists repping the labels include: Futurebound, Andy C, Friction, Brookes Brothers, Fred V & Grafix, Mind Vortex, The Prototypes, InsideInfo, Icicle, Six Blade, Metrik and more. And we guarantee each one of them will be packing dubs and exclusives that have never been heard before!

Radio will be melted: The last time airwave takeover tension was experienced at this level was 1938 when Orson Welles first broadcasted War Of The Worlds and scared America silly when he duped listeners that aliens had invaded the country. In other words: this is going to be legendary.

We shouted each label for their own battle mission statement. Shogun brought out the top dog Friction himself with a classy, understated one-liner, Hospital have unleashed a document of Napoleonic proportions, Viper are in total psych mode while Ram showboat their double-decade repertoire with playful repartee.

Best of luck to all labels, all players… Let battle commence!

#TEAMVIPER
”We are Viper, the illest supplier. Sending Shaolin to your Shogun, de-horning the RAM and putting them all in the Hospital!”

Bigups to Radio1xtra and the main man Mistajam for delivering us the coliseum for this epic battle of bass gladiators. We have been getting our dubplate weapons ready and will be bringing enough heat to melt out your speakers. This is  an epic moment for all D&B fans and a MUST listen… You can show your support with #teamviper.”

#TEAMSHOGUN
“What a great event to be a part of! Proud for Shogun to be involved and we’ll be bringing the heat in our own unique way!” – Friction

#TEAMRAM
“Heads Up because here’s the Lowdown and there’s going to be some Turbulence. With Titan bass and serious Swag we’ll bring the End Credits to test you with a Workout. Expect Absolute Monster, Molten Beats with a Link To The Past – You’re all just a Façade stuck in a Time Warp. You’ll be walking the Valley Of The Shadows and waiting for the Afterglow.

Ask yourself this – Is It Worth It?”

#TEAMHOSPITAL
“With our troops ready, we’re certainly fired up for the D&B Soundclash with BBC Radio1 & 1Xtra this weekend. It’s a pleasure to go head to head with what can only be described as the Crème de la crème of the scene.

Tough guys from Viper, Shogun’s shoegazers, and Ram’s cockney thugs are no match for our skilled surgeons. Armed with Weapons of Mass Creation we’ll blow the gaff wide open with soul and style!

Jokes beef aside, the D&B scene is fresher than ever and it’s amazing for the BBC to recognise this enough to conduct such an exciting showcase. The diversity of the four labels involved (and so many others) is what keeps our scene crisp with an array of new talent and releases, all of which have their own individual stamp. So it’s more than just a soundclash – it’s a celebration of the strength of the scene. We’re all winners, whatever the outcome… except we will be the winners… obvs.”

Which team are YOU on?